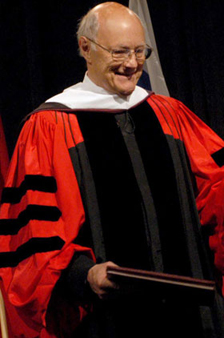 As the 8th president of Augsburg, Anderson led the College to strengthen its commitment to liberal arts education, spiritual growth, and freedom; expand diversity in enrollment and programs; and advance its curriculum to draw more fully on the resources of the city as an extension of the College's campus and classrooms.

During Anderson's 17 years as president, Augsburg College instituted two graduate degree programs, hosted national and international figures at College-sponsored forums and events, and celebrated the addition and improvement of numerous campus facilities such as the Foss Center for Worship, Drama, and Communication; the Oscar Anderson Residence Hall; and the James G. Lindell Family Library.

At the time of Anderson's retirement, then-Board of Regents Chair Barbara Gage described his legacy as one in which "leadership, energy, faith and pursuit of new ideas...helped Augsburg fulfill her mission to create leaders in service."

Gage said Anderson epitomized the servant leader and left Augsburg strong, healthy, and ready to have a positive impact in the 21st century.

"Charles Anderson's influence on the Augsburg community is deep and long-lived," said Augsburg College President Paul C. Pribbenow. "The priorities Anderson outlined and championed during his tenure continue to shape how we live out our institutional mission and celebrate life and learning in the city each day."

A tribute to Anderson's legacy will be included in the next edition of Augsburg Now magazine and published online in the coming weeks.

The Anderson family has requested that memorials be sent to St. Anthony Park Lutheran Church, Luther Seminary, or Augsburg College.