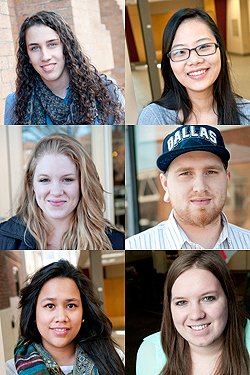 When it comes to community involvement and leadership, Auggies rock.

That's why Augsburg is the only Minnesota college or university invited to participate in the Bon Jovi Community Service College Campaign when the internationally known rock band stops at the Xcel Energy Center on Sunday, April 7, for its "Because We Can" tour.

This campaign is "a once-in-a-lifetime experience, and we're excited to have the opportunity to partner with Augsburg College on it," said Xcel Energy Center Vice President and General Manager Jack Larson. "The College's mission, with a distinct focus on service learning, was a perfect fit for the program."

Bon Jovi has a firm commitment to community and opened up its 2013 tour production to six Augsburg students [pictured] who champion volunteer efforts and demonstrate exemplary community leadership skills.

In February, Augsburg received extremely strong applications and nominations for the Bon Jovi campaign, and a half dozen students were selected for the program from a highly competitive applicant pool.

A history of community engagement

Augsburg students amplify their college education with opportunities that encourage them to connect with the community in a powerful way, according to Andrea Batt '13, one of the students selected for the Bon Jovi program.

Those who "teach, work, and go to school [at Augsburg] are a really special breed of people who are passionate about being involved in the community," said James "Bear" Mahowald '13, another Bon Jovi program participant. "It is definitely an environment that fosters active community members and passionate human beings."

For international student Alom Martinez Aleman '13, civic engagement and volunteer work linked to Augsburg has helped her to develop a sense of belonging in a new community, to "feel at home away from home," and to learn about American culture. "I meet a lot of awesome people," she said. "And, I feel that being engaged with your community makes your college experience much more rewarding."

As proof of the College's commitment to community engagement, Augsburg College last month was named for the fourth time to the President's Higher Education Community Service Honor Roll and, in 2010, won the Presidential Award for Community Service, the highest honor possible for service work.

"Augsburg students understand the important links between education and service," said Augsburg College President Paul Pribbenow. "We are recognized nationally and internationally for this work, and it's because of the effort of students such as the six who will be at the Bon Jovi concert."

On the day of the concert, Batt, Mahowald, and Martinez Aleman will join Auggies Alex Jamieson '14, Thu Nguyen '15, and Morgan Waldorf '15 to work with the Bon Jovi production team and to gain hands-on experience in public relations, media, management, and ticketing.

"Helping with the Bon Jovi tour will offer me the chance to work with a professional marketing team, which is a great experience for my major," Nguyen said. "I have been counting down the days to the concert."

Waldorf is also excited for the chance to help with the Bon Jovi tour. "I'm hoping to have a career in public relations within the music business," she said. "This is the perfect opportunity to gain experience working with a big band on a huge tour and see everything that goes into it."

Jamieson said service experience allows her to connect concepts from her classroom education with their application in her future career. And, as a business administration: music business major, she sees the behind-the-scenes Bon Jovi program as an unmatched opportunity.

"I can't believe I actually get to take part in such a unique program," Jamieson said. "I'm excited to gain first-hand experience in what I'm studying about the music industry."

Augsburg students also are learning what it's like to be interviewed by media professionals assigned to cover their involvement in the Bon Jovi program. The Auggies spoke with WCCO-TV on campus March 29, visited the KARE11 studio April 3, and will appear in other interview segments scheduled to air this week.

Plus, the Auggies will see all the elements of the Bon Jovi's tour production come together when the band takes the stage for a performance at the Xcel this Sunday and will watch some of the concert from an area designated for local media.