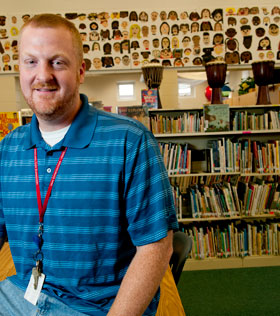 He teaches fourth grade and directs choirs at Highland Park Elementary in St. Paul, Minn. He also plays guitar and drums, sings in a band, and makes furniture and woodcarvings in the summer. But ask him why he was selected to receive a prestigious educator award, and this outstanding teacher blushes.

"I'm still trying to figure that out," said Steve Abenth '04. "I could make a list of hundreds of teachers who deserve this award, but I'm very honored to have received it."

On November 9, 2012, Abenth became the newest recipient of the Milken Educator Award for the state of Minnesota. The award, established in 1985 by the Milken Family Foundation, recognizes excellence in early- to mid-career educators. A committee appointed by each state's department of education selects the recipients. Abenth is the seventh Augsburg alum to receive the award since 2004.

His biography on the Milken Family Foundation website indicates that Abenth "creates an active 21st-century learning environment for his fourth graders." By integrating technology and hands-on learning into the classroom, Abenth helped his students achieve a proficiency increase of 18 percentage points in mathematics, according to the site. He also created a music program at the school because, he said, "There was no music teacher so I asked if I could start a choir."

Abenth decided to become a teacher after helping his brother, a physical education teacher, with a tournament at his brother's school. "I was hanging out with kids all day long and I had a blast," he said. Abenth earned his bachelor's degree in elementary education through Augsburg's Weekend and Evening program. He completed his student teaching at Highland Park Elementary and was hired there soon after he graduated.

Now in his ninth year at Highland Park, Abenth said he enjoys teaching because he can be himself in his classroom. "I am bringing who I am and what I love into my work." He added that working with many children from different walks of life and with different abilities is "both absolutely beautiful and challenging."

Abenth said he would advise new teachers to take risks. "Don't be afraid to try different things. Standards and routines are important, but changing the day up from your routine will make your students hungry for more," he said. "And don't be afraid to be wrong in front of your kids. When they know you're human, it makes them respect you and not be afraid to make their own mistakes."

The Milken Award comes with $25,000, which Abenth plans to use to obtain a master's degree in educational technology.

Read more about other outstanding Auggie teachers who have received the Milken Educator Award, and learn about teacher education programs at Augsburg on the Education Department website.