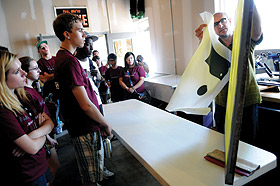 The award, presented by the NSEE and funded by The Washington Center for Academic Internships and Seminars, celebrates the dedication of a sitting college or university president who has made significant contributions to experiential education on campus and in the community.

Pribbenow, in an acceptance speech delivered on his behalf by Professor Garry Hesser, said the award is the result of the hard work of many who have dedicated themselves to the College and its mission to educate students to be informed citizens, thoughtful stewards, critical thinkers, and responsible leaders.

Going back some 50 years, Augsburg has been a leader in integrating internships, cooperative programs, community-based research, service learning, and other forms of experiential learning, into its curriculum."

Pribbenow was nominated for the award by Hesser, Sabo Professor for Citizenship and Learning; Orval Gingerich, assistant vice president for international programs; and Lois Olson, former director of the Strommen Center for Meaningful Work.

In their application, the three spoke of Pribbenow's motivation and support of experiential education through efforts such as the Sabo Center, the Strommen Center, Campus Kitchen, Bonner Leader Program, and more. "The mark of a good leader is building upon the strengths that exist and bringing new and enriching expansions to that base. That is what President Pribbenow has done and is doing."

The Burke Award, a testament to the fact that hands-on learning is a core part of the College's curriculum, includes a $2,000 scholarship that will be awarded to a deserving Auggie who is involved in experiential learning.

Augsburg College's commitment to experiential education was acknowledged during 2010 when the school earned the Presidential Award for Community Service, the highest honor in the annual President's Higher Education Community Service Honor Roll. Augsburg remains the only college or university in the state to win this prestigious award.

The College also was one six institutions in the nation that in 2011 received the Higher Education Civic Engagement Award for its commitment to public service and community involvement.

Photo: Each fall incoming first-year and transfer students participate in City Service Day, an occasion through which the students volunteer at organizations matched to their degree programs and experientially learn in the neighborhoods that surround Augsburg's Minneapolis campus.