Auggies abroad in the summer 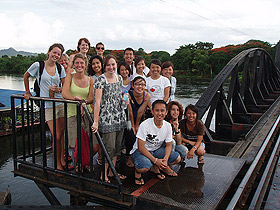 Though the semester program classes have ended at Augsburg for this academic year, students and faculty are still on the move. Starting on the day after last weekend's commencement ceremony, groups of Auggies departed both to share their musical talents and to study abroad.

On May 6, the Augsburg Choir, under the direction of Peter Hendrickson '76, departed for a 12-day tour of the Midwest. With stops in North Dakota, South Dakota, Montana, and Washington state, the Choir will perform nine concerts and have opportunities to connect with potential Auggies and their families as well as alumni and friends of the College.

Teaching English as a Second Language in Thailand with Kathryn Swanson

This is the fifth year that English professor Kathy Swanson and her husband, Jack, have taken students to teach English in Thailand as part of a short-term study abroad course through the Center for Global Education. Years ago, the Swansons served in the Peace Corps in Thailand for two years and still have connections in the small town where they once taught.

Before departing, students learn about language and culture in Thailand and practice speaking some "survival Thai," Swanson said. For the teaching week, students learn the pedagogy of teaching English as a second language—essentially what and how to teach. Some students on the program are English or education majors, but others are from other majors including business, religion, and the sciences. Students take Swanson's class, she said, not only to learn more about teaching English to language learners but also to experience life in a country half way around the world from the U.S.

For the three weeks they are in Thailand, Swanson said the group has an intense schedule filled with a variety of experiences. They travel by plane, boat, train, taxi, subway, tuk-tuks (a small open motorized vehicle, like a rickshaw), and even have a chance to ride elephants. They also take in tourist activities such as visiting temples, rafting on the river, and visiting pottery and silk makers. Then for ten days, they teach in Prachuap Khirikhan, the town where the Swansons taught while in the Peace Corps.

Swanson said the students often comment in their travel journals that they are completely shocked by their experiences in Thailand—by the sights and sounds and by the stark contrast between the poverty and opulence that can be seen there. "The only way to understand anything about the world is to do it," she said. "Word of mouth among students is that it's exhausting but it's worth it."

In this combined course in political science and history, students will explore the roots of Egypt's largely youth-led revolution and ongoing efforts to rebuild Egypt. Students will examine the effects that the 2011 revolution has had on public discourse about environmental sustainability, police brutality, Muslim-Christian relations, and access to basic services. They will also observe the historic presidential elections taking place in late May, visit mosques and pyramids, Nubian villages, an ecotourism resort on the Red Sea, and a Bedouin camp in the desert.

Read about the group's experiences on the Egypt 2012 blog authored by Joe Underhill.

International Management and Finance in Germany with Marc McIntosh

For four weeks in May and June, a group of German students and professors from Karlsruhe paired with Augsburg students and assistant business professor Marc McIntosh to study international business practices.

The group met for the first two weeks in Europe, visiting the European Parliament in Strasbourg and witnessing firsthand the financial crisis that was coming to a head in Europe at that time. They also went to the Frankfurt stock exchange and experienced the volatility in the financial market as a result of the crisis, McIntosh said.

While in the U.S., the students visited three companies with strong ties to Germany and gained insights into how to do business in overseas markets. Finally, the students participated in an intensive business simulation game with teams competing to maximize shareholder value through the launches of multiple product offerings.