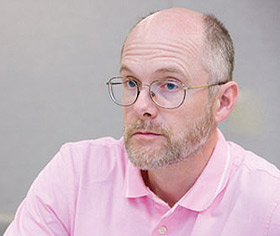 Title: MESSENGER at Mercury: Solving the riddles of the innermost planet in our solar system

Abstract: Because the planet Mercury is so much closer to the Sun than the Earth it is hard to observe with telescopes and difficult to reach with spacecraft, and is the least explored of the terrestrial planets. On 18 March 2011 NASA's MErcury Surface, Space ENvironment, GEochemistry, and Ranging (MESSENGER) spacecraft became the first ever to orbit Mercury. After overcoming numerous challenges and a journey of nearly 5 billion miles, MESSENGER trained its cameras and other instruments on the planet and revealed immense lava flows that would cover half of the United States, landscapes littered with hollowed depressions each the size of a small city, and evidence for bombardment of the surface by furious blasts of charged particles.

Title: Exploration as a Moral Imperative

Abstract: Humankind is inquisitive by nature and this impulse has played a critical role in technical advances throughout our history as a species from the development of agrarian societies to the Renaissance, the industrial revolution, and the explosion of formal scientific inquiry. Should we understand this capacity as something more than an accidental trait that gives humans a competitive advantage? Does the health of civilization depend on communal enterprises of creativity and discovery? Does the religious understanding of creation and life as more than incidental imply a moral imperative to create and explore?