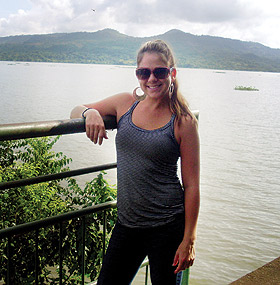 Erica Lippitt '13, international business major, returns to our CGE Mexico campus for the second time to study abroad. Here's a posting from her blog: The Struggles of a Migrant Worker

When we buy produce, do we really know what we are paying for, or the story behind the produce? Most likely the produce you recently purchased is produced with the help of migrant workers. Migrant workers, year after year, separate themselves from their families to work the season, which is usually eight months. Children are left without their fathers, and wives without their husbands, all because the economy of their home country is struggling and jobs aren't available. When we purchase produce, we don't think about the terrible living and working conditions the migrant workers are subjected to, the medical effects, or the non-economic effects.

It was this past week during our days in the indigenous community of Amatlán that I learned about the hardships migrant workers endure. We heard the story of Alvaro, a man who migrated to both U.S and Canada with work visas to work in the agricultural sector. The living conditions he described are inhumane. Imagine living in a house with twelve other workers where there aren't enough beds, only one refrigerator and one stove. The carpet was full of bedbugs and mold growing along the walls. The work conditions aren't usually any better. Migrant workers usually work twelve hour days, seven days a week working with chemicals such as pesticides. Migrant workers usually encounter health problems from working with pesticides, both short term and long term and there aren't enough knowledgeable doctors. Many workers are unaware of their medical rights because everything is written in English and/or nobody told them and unfortunately is doesn't help with long term illness that for many results in death.

As consumers we are made to believe that a large, red tomato is the best and what we should buy, but we don't see what is behind the big, red tomato. We don't know about the effects from the pesticides and other chemicals the workers work with, or the living and social conditions many migrant workers encounter. These hard working men and women migrant workers endure all of this because they see a light and hope to better their life and their families.

Something to think about as I return back to the U.S is if there are migrant workers in my community and if so, what I can do to not seclude/discriminate against them. Also I think we should think of ways to advocate for migrant workers, whether it be concerning working conditions, living conditions, medical rights, long term effects, and community involvement. How can we get involved to make the already treacherous journey a little better? What rights to legal and/or non legal migrant workers really hold in the U.S?

Apply to Augsburg Abroad by MARCH 12. Come to Murphy Place for walk-in advising: