Practicing "I have a dream" and schools of citizenship 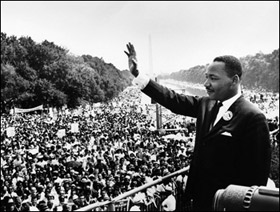 Today, on Martin Luther King Jr.'s holiday, I've been thinking about the March on Washington and how much its citizenship message is relevant.

In the summer of 1963, my father, Harry George Boyte, went on staff of King's organization, the Southern Christian Leadership Conference. At his urging I hitchhiked across the country, arriving in Washington the day before, August 27, 1963, on my way to Duke as a freshman in the fall. I lay in a sleeping bag on the floor of his hotel room. Early in the morning, I heard King's booming voice in a nearby room, practicing "I Have a Dream."

It was an electric moment. The message took on added depth and power as the day unfolded. "Let us not seek to satisfy our thirst for freedom by drinking from the cup of bitterness and hatred," King thundered. The march's program notes, issued in the name of March leaders but most likely written by organizer Bayard Rustin, conveyed a similar message, calling people to rise to a larger citizenship despite whatever justifiable anger many might feel. "In a neighborhood dispute there may be stunts, rough words, and even hot insults. But when a whole people speaks to its government, the dialogue and the action must be on a level reflecting the worth of that people and the responsibility of that government."

As Charles Euchner describes in Nobody Turn Me Around, subtitled a "people's history of the 1963 March on Washington," the March's citizenship message channeled a movement culture which had incubated for years in local "schools of citizenship" on college campuses and in beauty parlors, church basements and nonviolent training workshops. There, people developed the sobriety of citizens, the ability to put aside immediate impulses for the larger work, to "keep our eyes on the prize" in the words of the freedom song. I saw this process again and again as I worked in the Citizenship Education Program of SCLC over the next two years. All this added up to a vast process of citizenship education, which helped to wake up the nation after the somnolent, consumerist, privatized 1950s.

Today, we need a similar re-awakening. Private pursuits have taken the place of public ones. What one owns is too often the measure of one's value. Our citizenship declines while we are entertained as spectators, pacified as clients, and pandered to as customers. We need again to call forth America's democratic genius of a self-reliant, productive, future-oriented citizenry. And once again we need citizenship schools, for the new century.

Harry C. Boyte, Director of the Center for Democracy and Citizenship at Augsburg College, is coordination of the American Commonwealth Partnership, which supports "democracy colleges for the 21st century" as schools for citizenship.