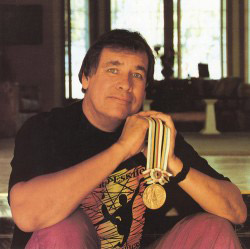 "Native youth will have the chance to step foot on a college campus, something that many of these students have never done before," said Jennifer Simon, event organizer and director of Augsburg's American Indian Student Services.

Students are confirmed from a number of metropolitan school districts, including Minneapolis, St. Paul, Robbinsdale, Anoka, Centennial, Osseo and others.

Billy Mills, also known as Makata Taka Hela, is the second Native American to win an Olympic gold medal. He accomplished this feat in the 10,000 meter run at the 1964 Tokyo Olympics, becoming the only American ever to win the Olympic gold in this event. His 1964 victory is considered one of the greatest of Olympic upsets. A former United States Marine, Billy Mills is a member of the Oglala Lakota (Sioux) Tribe.

12 p.m. "Wings of an Eagle," Native American Olympian Billy Mills, who was born and raised on Pine Ridge Reservation in South Dakota, presents a motivational presentation on living a drug-free, alcohol-free life, attending college, and more.

1:15 p.m.  "What is a College Class Like," Eric Buffalohead, professor and chair of the American Indian Studies Department, talks about what students can expect when they get to college.