The journey of a sweater 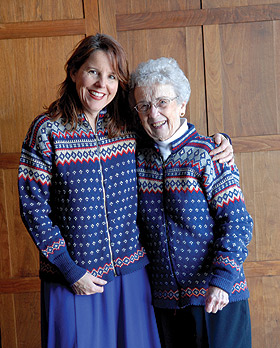 On any given day in the winter at Augsburg, especially around the Christmas holidays or during our annual Velkommen Jul celebration, one can be sure to spot a Norwegian sweater. The traditional Norwegian lusekofte ("lice jacket"), also called "setesdalgenser" (setesdal sweater), is a design that dates back to the early 18th century.

Augsburg's Mary Laurel True of the Center for Democracy and Citizenship has a Norwegian sweater with an interesting history. She writes:

Several years ago I bought what I thought might be a Norwegian sweater at Savers second hand store so that I would have appropriate attire for the celebration of Velkommen Jul at Augsburg College.

I wore it a little sheepishly the first year not knowing if the many members of the Augsburg Norwegian community would think that I was foolishly wearing a sweater from the wrong country.

While enjoying some traditional treats of the day, I was approached by one of the long-time Augsburg Associates volunteers, Evie Sonnack, who was looking with amazement at me as she asked, "Where did you get that sweater?" I said that I had bought it in a second hand store in Minneapolis. She happily told me the following story:

Evie's mother-in-law and her sister were traveling around Norway in 1959 and decided to order handmade matching sweaters. One sweater was for herself, and one was for each of her daughter-in-laws. When Evie's mother-in-law passed away, she was given her sweater. Evie kept it for several years and then donated it to a thrift shop.

She said that, in fact, the exact sweater that I was wearing was the one that her mother-in-law had ordered on that trip. She was sure of this as it had unusual features that made it easy to distinguish from other Norwegian sweaters of its kind—both had zippers (not pewter clasps) and a very distinct pattern.

The sweater I was wearing had found its way home to the Norwegian college for a Velkommen Jul celebration. I begged Evie to wear her 1959 red, white, and blue sister sweater to Velkommen Jul the next year. She did, and we marveled at the sweater' reunion to each other after all these years!

Evie (nickname "Inch" because she's so tiny) is an Augsburg alum 1943. She met her husband, Paul Sonnack '42 at Augsburg. Paul's father, Paul Sr. graduated from the Augsburg seminary and college in 1919.