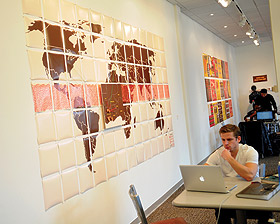 You might have noticed something different in the Christensen Center recently. It's not the hundreds of feet of orange air compressor hose nailed to the wall or an empty office space behind the welcome desk. It's a series of facts and figures in an art installation that may encourage you to think differently about your next candy purchase.

The current show in the Christensen Center student art gallery, The Dark Truth about Chocolate, has something a little different to offer than the usual art installation provides. Augsburg design and graphic design students took part in organizing an art show around the trafficking and child labor in the chocolate industry. Under the direction of professor Chris Houltberg, a new addition to Augsburg faculty this fall, the students were challenged to make an art show that stood for something.

"Design is visual communication," Houltberg said. "I wanted to take a social issue and let the students create an exhibition knowing the complexity of the issue and challenging them to show the complexities through design."

Because Houltberg believes a fundamental part of the design process involves research, the students began learning about the chocolate issue by watching a documentary called The Dark Side of Chocolate. Next, they Skype called a leading researcher, which allowed them to ask questions unanswered by the video. Lastly, they did individual research on specific topics.

The group decided on three main goals for the show. First, raise awareness to the issue of child labor and more specifically trafficking in the cocoa industry. Second, ask people to do something in the form of joining the Ten Campaign, an international organization to stop trafficking, or to send a postcard directly to Hershey, the biggest offender in the U.S. Third, offer an alternative in the form of fair trade chocolate. The show was sponsored by Ten Campaign, the national campaign leading the way to stop trafficking and slave labor in the cocoa industry.

Houltberg not only challenged students to be purposeful in their design choices; he also wanted to give them an experience that was close to a real world design situation. As such, students were presented with design standards and could expand on the concepts within the confines of those standards. They were also able to see the project from concept to print and production and to be involved in a constant process of refinement, something Houltberg said is not always possible in an academic situation.

Kacie Lucchini, an art history and media writing major, said she enjoyed seeing the reaction of attendees at the show's opening reception. "As an artist, watching people realize that the show was about the children who are forced into slave labor all so they can have a Reese's was a moving experience. 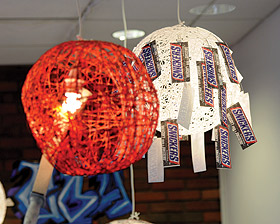 Each element of the installation communicates details about trafficking and exploitation of children in the cocoa industry, but some messages are more abstract. For example, each piece of candy that is missing a bite approximately represents the wages of the people who produce the cocoa. And there are 18 spheres in the "Illuminated Cocoa Field" portion of the installation [at left] correlating to the 1.8 million children working in the cocoa sector.

Lucchini thinks that the 38 students who worked on the project will definitely make more conscious decisions about their purchases. "I think it's a lasting memory for some of us," she said.

Marketing and graphic design major, Joe Vokracka, said that though he knows the show won't change the minds of everyone who views it, he believes the classes were successful in helping viewers understand where their food comes from. "This show with this subject matter would not have been as successful anywhere else," he said.

Houltberg is pleased with the results of the students work. "I think they succeeded with the push-pull that happens in an installation like this. The color palette is very pleasing, but when you get up close you see that the subject matter is not. That's a very good analogy for candy."