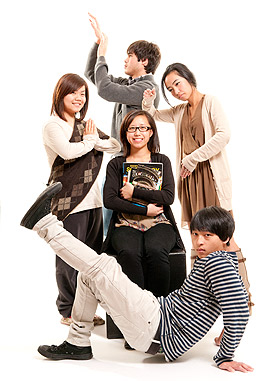 Walk past the student lounge in Christensen Center on any given afternoon, and it becomes clear that Asian American students make up a sizeable portion of the Augsburg student body. The lounge is a popular hangout for students—a place for them to study, relax, and connect with each other.

To hear some stories of Asian American students at Augsburg, attend the Augsburg Theater Department production of Inside Out. In collaboration with Mu Performing Arts and Pan Asian Student Services, Augsburg will present Inside Out Nov. 18-20.

Inside Out was created and is directed by Rick Shiomi, artistic director of Mu Performing Arts of St. Paul, Minn. The project began when Shiomi interviewed several Asian American students at Augsburg. Based on the interviews, Shiomi developed a series of short scenes that reflect their experiences. The performance also includes additional scenes created by students.

See Rick Shiomi talk about engaging students in Inside Out

Shiomi said this project is part of Mu's outreach programming and a continuation of a longstanding relationship with Augsburg. "In the last three or four years, the number and profile of Asian American students [at Augsburg] has been growing rapidly," Shiomi said. "We wanted to create a project that would engage some of those students in the theatrical process, to understand that their stories are important, to see that they can be presented on stage, and to get some experience on stage."

In fact, the number of students in the undergraduate day program who identify as Asian American has grown from 6 percent in 2008 to 8.2 percent in 2011. According to Penh Lo, director of Pan Asian student services, the largest percentage of students are Hmong American (41 percent) followed by Vietnamese, Korean, and Laotian. Overall, 14 different cultures are represented in the Asian American student population at Augsburg.

Shiomi said he has been impressed with the enthusiasm of the cast members and with the wide range of experiences they worked with in the production. "Certainly there are the challenges of the immigrant experience, but there are a whole number of issues that came into play in this production, like dealing with mixed race parents, dealing with racism, and establishing an identity."

Lo believes allowing students to tell their stories is a powerful way to connect them to each other. "Whether the stories are similar or different, there is a connection. It is people telling others, 'This is how I came to be,'" he said.

One of the actors is Mai Choua "MC" Thao '11 [above right], a business major and a Hmong woman who said she has always had a passion for acting. "What I have been stressing to my friends is that not a lot of Asian Americans are out there telling stories about their personal lives," she said. "This will be a good way for others to hear the voices of the everyday struggles that Asian American students are going through."

This production is part of the Theater Department's move to explore ways to engage the entire campus community and to establish relationships with Cedar-Riverside neighborhood organizations. The department has created a statement expressing its intention to "engage with our diverse campus community in regards to the representation of culture, race, ethnicity, national origin, gender identity and expression, sexual orientation, socio-economic class, religion, disability, and age on and off stage."