A late-blooming artist brings his work to Augsburg 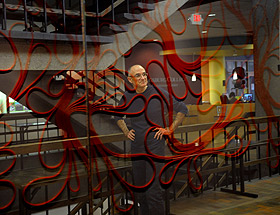 By his own admission, David Wilson was not born an artist. In fact, it was only after failing at college and going out into the working world that he began to discover a love of creating art. "I didn't come to art early or naturally," the artist and professor now says. "Everybody has a different timer connecting to what they really want to do in life."

Wilson, an associate professor of art at the University of Tennessee, is the creator of  "Ocotillo," the newest installation in the Christensen Center gallery.

In a talk he presented on Nov. 3, Wilson told students how he was actually asked to leave college after his first attempt. He left school and held down a variety of jobs from construction worker to custodian before he decided to give education another try. At age 25, he enrolled in a "second chance" program at a California community college and worked his way through school.

Wilson said his schooling in art was broad, including not only formal education but also personal contact with artists. He made items for artists and said he would go to the Los Angeles studios of well-known artists to talk with them and learn about what they were doing. "At that time, you could do that kind of thing," he said. "Artists would invite you in and talk with you."

Since that time, Wilson has taught and also created art as an artist-in-residence in Switzerland, Slovakia, Finland, Australia, Iceland, and India. "On residency, I look for materials that are local and try to find something I can use," he said. His media have included chickens, rope, rubber bands, billboard paper, doors, and tape.

Wilson's recent installation at Augsburg uses orange air compressor hose that is typically used in nail guns—an element he discovered on a trip to a hardware store. Ocotillo's broad, sweeping forms are meant to convey the concept of endless drawing.

"I like to use the space as it is and create a form that exists only in that space," Wilson said, adding that he often discards the media used in his work once the installation has ended. He said he was not sure what would come of the 1,350 feet of hose now installed in Christensen Center.

"Ocotillo" will continue through December 16.