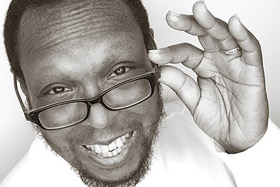 The 2011 Anne Pederson Women's Resource Center Koryne Horbal lecture features Duke University professor and author Mark Anthony Neal speaking on the topic: "What the Hell is a Male Feminist?" The lecture is Thursday, November 3, at 11 a.m. in the Hoversten chapel.

Mark Anthony Neal is a professor of Black popular culture in the department of African and African American studies at Duke University, author of Blues Nation (2003) and New Black Man: Rethinking Black Masculinity (2005). Neal is engaged in interdisciplinary scholarly work in the fields of African-American, cultural, and gender studies that draws upon modes of inquiry informed by the fields of literary theory, urban sociology, social history, postmodern philosophy, Queer theory and most notably popular culture. His broad project is to interrogate popular culture—music, television, film, and literature—produced within the context of Afro-diasporic expressive cultures. It is his belief that popular culture represents an arena of knowledge that has a profound impact on societal and cultural norms in the United States and globally, but one that has been largely underscrutinized as a "serious" site of scholarly and theoretical study. He also believes that commercial popular culture represents a distinct site of ideological production; thus, his work aims to engage the ideological undercurrents within commercial popular culture particularly within the context of race, gender, sexuality, class, and ethnicity.

Introducing the Courageous Woman Awards
At the convocation, the Women's Resource Center will present the first Courageous Woman Awards. These awareds  acknowledge and recognize women who see injustice or need, act on it, take risks in order to "do the right thing," and raise their voices to champion women. Founded in 2011 by Friends of the Anne Pederson Women's Resource Center at Augsburg College, the awards program recognizes women who courageously strive for social justice and peace on campus or in the wider community and whose efforts, be they small or large, make a difference to women. The 2011 awards are given in memory of Jessica Nathanson whose life exemplified what it means to be a courageous woman.