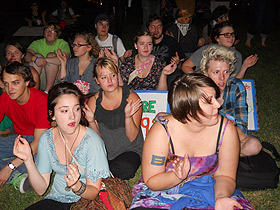 The first mainstage production of the Augsburg theater season begins this week with The Persecution and Assassination of Jean-Paul Marat as Performed by the Inmates of the Asylum of Charenton Under the Direction of the Marquis de Sade, a play by Peter Weiss. Through their roles in the play and their participation in a growing U.S. protest movement, the Augsburg cast members have experienced the power and complexity of a peoples' revolution.

Set in the historical Charenton Asylum, Marat/Sade is a "play within a play" performed by the Charenton inmates. The main story takes place on July 13, 1808, after the French Revolution; the play in the play, directed by the Marquis de Sade, takes place during the Revolution in 1793, culminating in the assassination of Jean-Paul Marat.

Because the play centers on the subjects of revolution and transfer of power, director Darcey Engen took the cast to an organizational meeting of the OccupyMN movement at "The People's Plaza" (the Hennepin County Government Center plaza) in downtown Minneapolis.

OccupyMN is part of the Occupy Wall Street movement that began in September. The movement is aimed at "corporate forces of the world" which, according to the movement's declaration of occupation, "place profit over people, self-interest over justice, and oppression over equality, [and] run our governments." Protesters in Minneapolis have been posted at the Government Center plaza since October 6.

In her director's notes, Engen wrote, "We all sat on the grass with a large, peaceful crowd of people from every walk of life. The organizers of the rally explained the importance of horizontal organizational decision-making and taught the group various ways to discuss the issues at hand that included everyone present.

We felt the visceral passion and intellect of the larger group. We felt the calm patience that everyone seemed to possess. We felt the power of numbers as we participated in the large discussion. We were experiencing something related to what the characters in Marat/Sade experienced during the French Revolution.

Our trip downtown to the Government Center gave us a glimpse of what it might be like for a very large group to communicate and work toward a common goal, a common cause."

Liz Behnke, a theater major, said she was surprised at the organization and sense of community at the OccupyMN site, which the cast visited on the second day of the movement. "People who perhaps did not even know each other decided to get together and change the injustice happening in the world. And they are doing it by listening to one another and discussing the changes that need to happen," she said.

Sophomore music and theater performance major, Michael Wesely, plays the Marquis de Sade. Wesely, who said he has spent a lot of time researching his character and his role in the French Revolution, said the OccupyMN movement showed him similarities between what was happening in France and what is now happening in the U.S.  "I saw how close to a revolution we are," he said.