Reflections on violence in Norway, U.S. 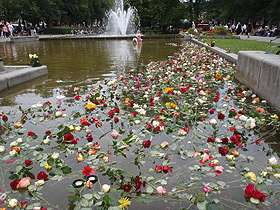 Sonja Blackstone '12 and professor Frankie Shackelford reflect on the violence in Norway which occurred this summer and its connections to Sept. 11, 2001. Blackstone and Shackelford were in Norway during the attacks for the Nobel Peace Scholars program.

I was living two miles from downtown Oslo this summer, studying peace and conflict at the University of Oslo. On the afternoon of Friday, July 22 my friends and I were enjoying the beginning of our weekend when we thought we heard thunder. Twenty minutes later everything changed. Word of an explosion began murmuring through campus, students who had been downtown flooded back, scared, with stories of broken glass and people running. The first few hours after the explosion were wrought with confusion. Who could have done this? As an American, it was difficult not to feel reverberations of 9/11. As a Peace Scholar studying in Norway, it was almost impossible to understand how this could happen in "The Peace Nation."

I was 13 on 9/11. We were in school, and we were watching the TV coverage of the first plane when the second plane hit. I remember thinking, "This is like some sort of action movie, when is Bruce Willis going to come in and save the day." It was absolutely unreal.

Luckily the bomb in Oslo hurt very few people. It was a Friday afternoon in the middle of July, a time when most Norwegians are on holiday. A few hours later we heard the reports of the shootings on the island. The Norwegian media was reluctant to link the incidents, and we were all confused. By this time we had all been pumping adrenaline for several hours but it was Friday night and most of us had made plans to go to parties or socialize. At a short meeting the director of the summer school told us to continue our normal activities. Most of us unhooked ourselves from our laptops (the BBC had been running live coverage for hours) and went to try and relax.

In the morning we were awakened with the shock of the actual death toll for the shooting on the island. We were horrified again and all thought of relaxing or forgetting was gone. The bombing was no longer centralânow it was the great loss that we all felt. As bright students from our own countries, we mourned the loss of so many promising young adults.

The Norwegians immediately said they would remain an open democracy, not shutting down or closing off in fear. It is completely common in Norway to have access to public officials' private information such as home telephone numbers or addresses. It is also likely that you could run into even high-ranking politicians in the grocery store. Immediately after 9/11 everything in American became about being safer, about trading liberties (large or small) for peace of mind.

I will admit that the attacks were very different. The US was victim to an attack from outsiders, who were attacking the very concept of America at its core. They were trying to destroy America as it stands, not a certain political party and not any specific agenda. The attacks were very grand, took a lot of planning, and were carried out by many people. The attacks in Norway were carried out by one man, a Norwegian citizen, unhappy with certain policies in the ruling party. The attacks were direct, targeting not only government property but specifically the youth of that party. Youth Parliament in Norway is not some little-tended-to after school activity. It is an active part of Norwegian government, and many future leaders of the party were present on that island. He didn't take out the people in power; he took out the party's future.

Perhaps it's easier, ideologically, to calm a small country after a singular attack than to calm a large country after a broad base attack. What I know is that I would rather be in Norway after 7/22 than in America post 9/11. The openness of the Norwegian government and the people of Norway and the warmth and acceptance that they professed is absolutely preferable to the anti-Islam that still simmers in American culture.

As we mark the tenth anniversary of September 11th, the renewed images of horror and grief mingle in my mind with fresh ones from this summer in Norway. When the car bomb went off outside the main government buildings on the afternoon of July 22nd, I was a few kilometers away  at the University of Oslo watching a documentary on the life of Prime Minister Stoltenberg. The film followed him through strenuous days of policy debates, strategic planning, and brief naps in the office that the bomber had targeted. But the most memorable clip for me was Jens Stoltenberg sitting in a tent at Utøya, the small island that would soon be the focus of the global media, as he explained the formative role of the Labor Party's annual youth camp, where he has spent time every summer since 1974.

When I emerged from the film with enhanced confidence in Labor's leadership, the news of the bombing shattered my mental landscape. A few hours later the news of the shootings at Utøya would break my heart. Like the sharp contrast of the clear blue September skies with the smoke from the collapsing Trade Towers, the incongruity of a heinous act of terrorism in "the peace nation" was all the more shocking. Much like Americans in September 2001, Norwegians on July 2011 experienced a sudden end to their sense of invulnerability.

In the days that followed, as the sad stories of the 77 victims and the terrifying tales of over 500 survivors filled the news, Norwegians, like Americans, were incredulous. The most frequent adjective used in interview after interview was ufattelig (incomprehensible). A decisive break has occurred in the national self-perception. Just as all Americans who experienced it are forever marked by September 11th, all Norwegians will carry with them the shared tragedy of July 22nd. But there the comparison ends.

Whereas the terrorists on 9/11 were militant outsiders seeking revenge against greedy infidels, the perpetrator on 7/22 was an ultra-conservative insider, the beneficiary of a secure upbringing in a welfare state with 100% literacy, universal healthcare, and the second-largest sovereign wealth fund in the world to insure his future! More parallel with the Oklahoma City bomber, Anders Breivik directed his hatred at his own government. He blamed the Labor Party for envisioning and implementing a pluralistic society that threatened his narrowly western worldview. He aimed to eradicate their next generation of leaders. Whereas the American response to 9/11 was one of heightened homeland security and aggressive retaliation, the Norwegians have responded with restraint and dignity, calling for more democracy, more openness, more dialogue and compassion.

Norway will no doubt adopt increased security measures, since the Norwegian police have not routinely even been allowed to carry weapons. The single police helicopter, which was grounded on 7/22 with its entire crew on vacation, will surely be expanded into a more effective fleet, and surveillance of extremist viewpoints on the internet will be increased. The nation is in for an extended period of soul searching, but the outcome will not be a culture of fear like ours. Rather all signs point to an atmosphere of increased concern for one another's well-being and more expressions of welcome for the immigrants who are enriching the formerly monochromatic cultural landscape.

The Labor Party Youth includes many children of immigrants, and several young Muslims were among the victims of the Utøya massacre. The first-ever Norwegian funeral to be officiated jointly by a Lutheran pastor and an Imam has been celebrated, and immigrants were well represented among the hundreds of thousands who turned out for the rose memorials held in every city and town. Far from achieving Anders Breivik's aim of making Norway a bastion against "Eurabia," his deed has served to chasten those with xenophobic leanings and to strengthen the collective will to integration and reconciliation. We can only hope that the remembrance of 9/11 this week will spawn a renewed sense of solidarity here.

Photos courtesy of Frankie Shackelford: Spikersuppe is a downtown park and Storting (lion statue) is the national Parliament