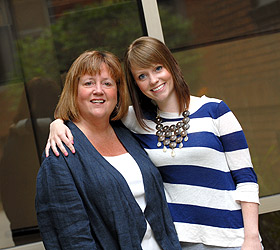 You could say that the Daniels family has a long history with Augsburg. If you're a visual learner, it might help to grab a pencil and paper and draw a picture as you read.

Sally went to work in the office of admissions just months after her graduation and continued to work in that department for 26 years. She currently is director of parent and family relations in the office of institutional advancement. This week, she celebrates 32 years of service to the College as an employee. And this year in June, Kristin became the newest member of the staff in Augsburg's office of undergraduate admissions.

Sally speculates that a "love of this place" is what makes the Daniels family's connection to Augsburg so strong.

Kristin remembers hearing her mother's stories from the admissions office and visiting campus when she was younger. "I liked to hear about the different types of students coming to Augsburg," she said. "I was always proud that she worked here."

Before she joined Augsburg's staff, Kristin worked in admissions for a cosmetology school, but she worked from home and had very few opportunities to reconnect with students after they were admitted. While she enjoyed her work, she promised herself that she would apply if a position opened at Augsburg.

Now, Kristin says she enjoys getting to know students and their families during the admissions process. "As a graduate of Augsburg, I feel like I have an advantage because I know about what my mom does [in her current position] and I know what questions parents are going to ask her," Kristin said.

Sally also feels that her many roles—Augsburg graduate, parent of Auggies, and long-time staff member—give her an advantage when working with parents and families today. "I feel like having worn these hats has helped me serve the college well, and when parents talk to me, I can say, 'I get it.'"

So far, Sally hasn't given much advice to Kristin about working in admissions, other than what to expect from life on the road when the traveling and recruiting season begins. "Things are different now, five years later," Kristin said.

We can only speculate about the next chapter of the Daniels family Augsburg story. Will Sally's future grandchildren be Auggies? Will the Daniels give a gift to build Augsburg's next residence hall? Will Maren or Kristin be Augsburg's first female president? We will have to wait a while to know.