Auggies in the Fringe 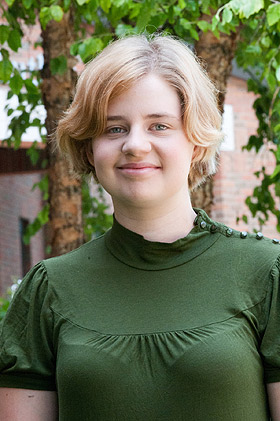 Molly Miller '11, a Medieval studies major with a concentration in theatre history, is one of several Auggies whose acting, directing, and/or writing talent is featured in the 2011 Fringe Festival.

The festival, now in its 17th year, the Minnesota Fringe Festival includes 168 shows from a variety of different artists, and all shows are selected at random. This year, the festival features Levi Morris '10 in Son of a ____! (that is the actual title, read about it in the StarTribune), Amber Davis '09 with Savage Umbrella in Ex-Gays, and Miller's show, Even the Gods Dream, which she wrote, directed, designed, and stars in as Boann, the Water Spirit.

Shows run August 4-14 in venues in Uptown, Downtown, the West Bank (including two stages at Augsburg College), and in St. Paul. For more information on the festival or to purchase tickets, go to the Fringe website.

We asked Miller about Even the Gods Dream and her role in it. Congratulations on getting into the festival Molly, and break a leg!

AC. Ok, I can read what your show is about on the Fringe site, but will you tell me in your own words about it?

MM. Even the Gods Dream is a story about the consequences of change and what it means to be alone. Boann, a water spirit, comes from a long line of princely figures. Her paternal relatives are all well remembered in stories and legends, while she herself is married to a prominent figure of society. Like her mother, and her maternal line before her, Boann is expected to live in the shadow of her husband and her male relatives. However, she is discontent with her role and frightened by the fact that her husband is distant and seemingly uncaring. So Boann searches for a way to change her status and ends up upsetting the magic which holds the world together and initiating a series of relationships which explore the depth of loneliness, the need for intimacy, and the power of lust.

AC. Where did you get the idea for this story? Is it based on the myth?

MM. Boann, as a character, has been swimming in my head for some time, unrealized. She makes her appearance into my art and poetry every now and again, but it wasn't until last summer when I discovered her story and everything fell into place. The play is based on a series of myths surrounding the birth of Aengus, the Celtic god of dreams, who was said to be begotten and born in one night. The original source material for these myths, however, are widely varied and do not focus much attention on Boann. So, to bridge the gaps between the stories, I added a few dreams of my own.

Now, even though this play was based on mythology, and it does contain some mythical elements, it is not your average mythic play. The characters in Even the Gods Dream are not meant to be heroes or villains and the choices they make are neither good nor bad. The characters act in their nature. It is the nature of a water spirit to want to move. It is the nature of the High King to expect submission. And it is the interactions of these natures that initiate everything in this play. Any change or behavior is started from natural, rather than moral, character and yields both positive and negative results, shaping the world from antiquity into what it is today.

AC. Did you write this while you were in school?

MM. I did. I started working on the script late last summer and worked on it with vigor throughout the school year. In the fall I took a class with John Harkness called "The Medieval World." The class focused mainly on medieval literature and mythology from Norse, Anglo, and Celtic societies and, for my final project, I worked on this script. After the class was over, I continued to edit and develop the script. A script is never completed, in my mind, it continues to change and shift throughout the production process, and sometimes afterward. I fully intend to keep working on this script, expanding it into a full-length production.

AC. How was the show selected for the Fringe festival? Is this the premiere?

MM. The Minnesota Fringe Festival is set up by lottery. All artists interested in producing a show submit an application early in the year and, in December, a drawing is held. They randomly select shows via ping-pong balls with show numbers sharpie-markered onto them until all the venues are filled. The rest of the shows are placed on a waiting list and, if shows drop out, the producers are contacted and offered a place in the festival. In December I was placed on the waiting list and, in the middle of July I was contacted and offered a spot. It has been a mad rush ever since.

This is the shows' premiere. It has never been performed before. Looking back, it is a very young script. Usually scripts are a little more mature (having been revised and worked several times) before being put onto a stage.

AC. Who is in the cast and crew with you?

MM. There were five of us intricately involved in this process. Tony Carlson, who is a recent graduate of the Perpich Center for Arts Education and a future student of the Eugene Lang College in NYC, was the choreographer for the show and my major support during all of this. He does fantastic work and I honestly can say I could not have gotten this far without him. My actors include myself; my brother, Tristan Miller (future student of the New York Conservatory for Dramatic Arts); Miles Neuvirth (co-founder and playwright for the WayWord Wordsmiths Theatre Company); and Hillary Hanson (currently attending the University of Minnesota in Rochester, Minn.).

Along with our core group, several others have made contributions to our project: Chris Rueber has been an unending source of support and has advised me throughout this whole process, Rae Jacobs has been my costume consultant, Vika Ishchuk has photographed and videotaped rehearsals for our records and has helped with publicity, and Vicki Joan Keck has also helped with publicity and postcard printing.