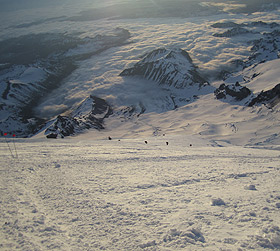 The following is from an email sent by Andy Thomas and Thomas Chester, two Augsburg College students who climbed Mt. Rainier and raised money to provide assistance for young people seeking treatment for addiction.

We are proud to announce to everyone who contributed, supported, and carried our message of hope that on July 1, at approximately 7:20 am, we successfully summited Mount Rainier. Thank you to everyone who has helped us reach our goals!

We woke up at 6:30 am Thursday, June 30, loaded our packs and joined our guides as we set off from Paradise at 5600 feet in elevation. It took most of the day, and despite a near white out and bad weather we reached Camp Muir at 10,000 feet at around 4 pm. As we approached the camp, we noticed that the sky was completely blue, and we could see Mount Hood in Oregon on the horizon. We had hiked above the cloud line and poor weather to find blue and sunny skies! We loaded our deprived bodies with carbohydrates and water, and got in sleeping backs in a small hut. It was no five star hotel, but we sure did appreciate the shelter. It was impossible to sleep, so we relaxed and tried not to think about what was going to happen that night. The weather was poor, and there were 60mph winds on the summit. We were both doubtful and fearful.

When we were woken up at midnight by our guides, we were absolutely astonished to find that it was completely clear on the mountain above, the wind had stopped, and the stars were so bright and close that we felt as if we could reach up and grab them. It was here that something strange started to happen, neither of us can pinpoint exactly what it was, but we felt for the first time that we were going to make it. It was as if something was telling us that if we worked through the hardships that were going to ensue, we would be rewarded. This "voice" or "feeling" was present throughout the entire time, especially when we felt like quitting. This is the first time that either of us have even spoken of this or tried to put it into words.

We put on our crampons and handled our ice axes as we roped in and began to climb. I (Andy) was placed by the guides on the last rope team, as the anchor. I was the last one up the mountain. Ahead of me I could see small yellow lights going up the sides of the mountain as we made our way through the Cowlitz Glacier and on to Disappointment Clever. The only lights that we had were that of our headlamps and the stars and moon.

It is hard to describe how eerie the mountain feels at night. At this point, because of the poor weather and the darkness, we had barely even seen the mountain except when we first arrived in Washington. You just had really no idea what you were walking on as it was very dark. You could sense an energy or presence that was clearly greater and more powerful then you. It is a hard experience to describe, the best that we can do is to say that we felt small, insignificant. Many times throughout the night we would look to the right or to the left while climbing a face and notice that our headlamps were not illuminating anything. That is to say, we were looking over a gigantic two to three thousand foot drop and our lamps were simply dying in the darkness.

A few hours into the climb, the sun began to rise. We were cold and tired, and to see the sun gave us great hope. It began as a glimmer on the horizon, but as it began to rise the snow started to change color and the light began to renew our much depleted energy supply. Small movements began to become tiring, like taking a sip of water, or opening our packs. We started to experience the effects of altitude. It should also be said that we barely spoke to each other throughout this entire ordeal. We were on separate rope teams and neither of us felt compelled to talk at any of the breaks. It was like an unspoken commitment to each other, to our cause, to you, and to ourselves.

Upon reaching the summit, we joined for the first time, just slowly walking towards each other and exchanging hugs and a few words. We took some pictures, rested, and prepared to head down. Getting down was the hardest part. Despite the breathtakingly beautiful views in daylight, the high sun began to soften the snow making crampon and ice axe placement more difficult as we descended. One of the funniest parts of the trip for me was while descending. There were two people roped in to me in front of me. Another member of our team was directly in front of me and ahead of him was our guide, Eric Frank. We were descending a rather sketchy face and I happened to see one of the crampons of the guy in front of me get caught in the ice. As he began to trip, I went into absolute psychotic mode. If he was falling, it would be up to Eric and I to anchor ourselves into the snow to prevent us all from falling off of the mountain. I screamed "FALLLLLLLLLLLING!!!!!!!!!!" at the top of my lungs, turned, buried my axe into the ice and anchored. I rose (very slowly, may I add) to find that the guy had not fallen and to be struck with the embarrassment that I had completely unnecessarily freaked out while every rope team below us laughed and pointed. I could not help but laugh myself.

We finally made it down to Camp Muir back at 10,000 feet around mid day. We rested for an hour or so, put food and water into our bodies, and began the descent to Paradise. At around 5 pm we got off of the mountain and into a shuttle that took us back to base camp.

As the co-creators of Summit for Sobriety, we both want to thank you for your support in this. Your support has truly meant the world to us. We will be discussing what direction to take in the next few weeks moving towards the future. We have a lot of decisions to make, but we know that with your help we have done something that has been a true miracle. Together, we have helped many people get into treatment by raising and donating over $30,000 dollars in patient-aid donations. With your forwarding of e-mails and word of mouth, we have raised precious awareness of the possibilities that recovery has to offer. Finally, with our climb, we have summited a mountain for those of us who have lost loved ones to addiction and alcoholism and for those that are still suffering from this disease. Neither of us are really sure how this has come together so beautifully, but it has, and without your support it would be impossible.

As one of our guides said, "The summit is for the ego, the journey is for the soul." Although we reached the summit, please know that what we truly appreciate is your support on our journey in helping fight this disease that has impacted so many people.

Please visit our Facebook page to view more pictures of the climb, and as always, keep track of us on our website.