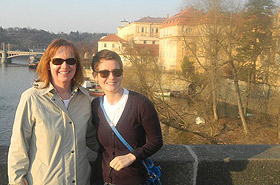 In the months preceding my anxiously awaited departure to Bad Mergentheim, Germany I made a few personal preparations. About three months prior to leaving, I began learning the German language and reading all the books I could find on German history and tourist highlights that I wanted to be sure not to miss. Regardless, no amount of studying or research could have prepared me for the shock of landing in Frankfurt among a crowd of German speaking Deutschlanders. Soon after arriving, I took my first ride on the Bahn and made it to the scenic little town of Bad Mergentheim, in which I have spent the last two months studying.

I'm currently studying international business at DHBW Mosbach campus. My first course was an introductory language class in which I digested more practical German in the first week than I had throughout the three months I'd spent back in the states in my extracurricular studies. My second course was Human Resource Management (HRM) wherein we were taught the value of corporative HRM. After HRM came macroeconomics, international accounting, and then finance. Classes at DHBW are quite different from those I've taken at my home institution in the states.

On the weekends I have seized every opportunity to travel to and view the many fine sights Germany has to offer. My favorites have been the castles in Fussen. The Neuschwanstein Castle was absolutely thrilling to tour. It was grand and elegant, piercing proudly through the mountains. Also, I have made my way to many cities on the romantic road. From Wurzburg to Munich, Augsburg to Rothernburg, Stuttgart, Hiedbronn, and Trier; every city has been an unbelievable adventure filled with charm and beauty, each surpassing its reputation.

I also had the wonderful opportunity to visit Berlin. During our five days there, I learned a great deal about the German government and a few of Germany's largest companies, not mention seeing countless attractions like the Berlin Wall. We started our tour with the Reichstag Parliament, climbing all the way to the top of the glass dome. I also learned all about Deutsche Bahn, Germany's national railroad company, as we received a lecture from the head of human resources at the headquarters. We visited the STASI-prison too, the famous Brandenburg Gate, and Alexanderplaz.

Outside of Germany I have visited a few of the surrounding countries including Switzerland, the Czech Republic, Austria, Spain, and the Netherlands. Amsterdam was, as it is invariably said to be, an incredible adventure. I visited the Red Light District, as you are obliged to do in Amsterdam, went to the flower market, the Anne Frank house, and the exquisite Van Gogh Museum. Although I must say, our most extraordinary visit had to have been the notorious Prague in the Czech Republic. It was there that I walked through the old Jewish ghetto and learned much of the city's history. Prague was simply a fairytale. One morning I woke up unusually early and beheld the sunrise on the Charles Bridge; a heavenly sight like none I'd ever set eyes upon.

This has been a wonderful experience that has allowed me to travel to places I would have shamefully never knew existed, meet and befriend delightful new people, and discover so much within myself that I never knew was there. It has been an education like none I could have ever wished to receive, and an experience I will always remember as the trip that so irreparably and fortuitously changed my life. I now possess that feeling you get after visiting somewhere new and knowing you could never be satisfied with just settling down to lead a "normal life." I want to see more, to ingest every bit I can until I'm full and expired. For anybody considering spending a semester abroad to study in Germany but isn't sure if it's worth it, my advice is to not dare deprive yourself of the wonders that lay within the majestic, inexhaustible Deutschland. Es ist die beste Erfahrung.