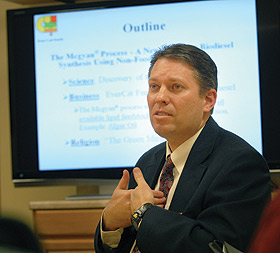 Clayton McNeff '91, chief science officer and chief financial officer for Ever Cat Fuels, recounted the story of the Mcgyan Process to an audience of more than 100 on May 10 at the Eye-Opener Breakfast. He told of discovering a process to make cost-effective biofuel that can reduce or eliminate U.S. dependence on fossil fuels. He also told the group that this "green miracle" began like many great discoveries, with someone asking the right question.

In this case, it was Augsburg student Brian Krohn, who was working on a research project in 2006 and asked his chemistry professor Arlin Gyberg, "Is there a better way to make biodiesel?"

Gyberg connected him with McNeff, his former student, who read the academic literature suggested by Krohn and saw potential. McNeff, Gyberg, and McNeff's colleague, Ben Yan, developed a process—which now carries their names, Mc-Gy-Yan—to make a biofuel that can be used in all diesel engines. The process is cleaner and faster than others, produces no waste, and can use all known feedstocks. Since it does not displace food crops for fuel, it has advantage over ethanol. A patent for the Mcgyan Process was issued in March 2011.

McNeff's team has now turned its attention from technology to applications. They've experimented with various types of feedstocks for the process including waste oils, weeds, algae, and waste treatment residues, and all have been successful. How then could farmers benefit?

A portable unit on a truck is all that's needed to enable farmers to produce biodiesel. They can plant a winter weed crop for fuel production, such as stinkweed; harvest it before they plant their main cash crop; and become energy self-sufficient.

By "harnessing the capacity of plants," McNeff said, the Mcgyan Process unlocks huge potential. Algae is very promising—63 million gallons of biodiesel can be produced on 10 million acres of algae that don't replace cropland. Cellulosic materials such as corn stalks, switchgrass, and wood chips are also favorable for large-scale production.

Their recent research was sparked by McNeff's 12-year-old son, Charlie, who asked another right question, which led to a demonstration grant to produce Mcgyan biodiesel from yeast oil.

McNeff said they've learned a tremendous amount at every point from "many long hours and thousands of discussions." He has documented the Mcgyan Process in a book, The Green Miracle, from the initial discovery to the current 3 million gallons per year produced at Ever Cat's plant in Isanti, Minn.

"I look back, now, and have no idea how it all came together," McNeff said. He added, "There are times in a scientist's life where there is so much joy in the discovery process."

Clayton McNeff is one of three campaign co-chairs for Augsburg's Center for Science, Business, and Religion. He grew up working at SarTec, the family business started by his parents, Larry and Marie, who is an Augsburg regent and professor emerita. The family donates to Augsburg a portion of the profit from every gallon of biodiesel sold. With the new science center, Clayton wants to ensure that Augsburg students continue to have a place to keep asking the right questions.