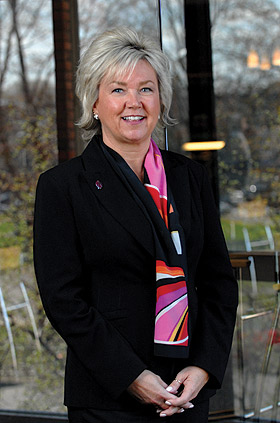 Cynthia Jones '81, PhD, physics graduate and Augsburg regent, is a senior staff member in the Office of Nuclear Security and Incident Response of the U.S. Nuclear Regulatory Commission (NRC). Since the Japan earthquake and tsunami, she has been working long hours in their Operations Center to help U.S. officials and the public understand what is happening at the nuclear reactor sites in Japan so that the U.S. can make informed decisions of the situation.

Jones has been with the NRC since 1988, first as a senior health physicist, and currently as senior technical advisor for nuclear security. She is responsible for coordinating agency interactions both with government and the industry, domestically and international, that relate to nuclear security, safeguards, radiological and nuclear protection issues, and potential health effects of adverse consequences.

In 2004, she became the U.S national officer and Advisory Committee member to the International Atomic Energy Agency's (IAEA) International Nuclear and Radiological Event Scale (INES). This scale uses a numerical rating, from 1 to 7, to explain the safety significance of nuclear or radiological events, similar to how the Richter scale identifies the severity of earthquakes. Currently the Japanese have rated this event as a provisional Level 5 on the INES scale.

As the Japan nuclear crisis has unfolded, Jones continues to serve as director of the NRC's Protective Measure Team to facilitate communications among federal agencies on protective actions as they relate to this event. This includes monitoring radioactive releases and predicting their pathways. Given the thousands of miles between Japan and the United States, Hawaii, Alaska, the U.S. territories and the West Coast, the U.S. is not expected to experience any harmful levels of radioactivity. For further information on NRC activities in this event, go to the NRC website. The IAEA daily news stories include a chronology of the daily briefings, videos with story resources and links to social media.