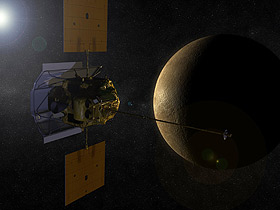 Last week, just past midnight after St. Patrick's Day, NASA's MESSENGER spacecraft successfully slipped into an orbit around Mercury, the innermost planet. This was a difficult maneuver against the pull of the sun, and the groups of science teams around the country who have worked on the Mercury MESSENGER project for seven years were elated, to say the least.

Among these scientists are two Augsburg physics graduates -- Brian Anderson '82 and George Ho '91. Both work at the Johns Hopkins University Applied Physics Laboratory (JHUAPL), which serves as the manager of the Mercury MESSENGER project for NASA.

Anderson is on the mission's core team; he is a deputy project scientist and oversees the orbital operations planning to ensure that observations from all of the instruments are coordinated to meet the mission objectives. He is also a MESSENGER co-investigator for the work of the Magnetometer, one of seven scientific instruments on the spacecraft. This will measure the strength and variations of Mercury's magnetic field, constantly collecting field samples.

Ho is an instrument scientist for another of the spacecraft's instruments, the Energetic Particle and Plasma Spectrometer (EPPS), which measures the mix and characteristics of the charged particles in the planet's magnetic field.

The goal of MESSENGER (MErcury Surface, Space ENvironment, GEochemistry, and Ranging) is to better understand Mercury, the planet with the oldest surface. It has been more than 30 years since data was sent from the Mariner spacecraft as it journeyed past Mercury but never orbited around it.

MESSENGER's successful entry into orbit was reached after a journey of 4.9 billion miles. The spacecraft was launched on August 3, 2004, and followed a path to Mercury that included a flyby of Earth, two flybys of Venus, and three of Mercury before inserting itself into orbit last week. MESSENGER will remain in orbit one Earth year sending back data before returning. Its instruments were started up and testing began on March 24, with data transmittal set to begin on April 4.

To read about Brian Anderson, go to http://messenger.jhuapl.edu/who_we_are/member_focus_08182008.html.