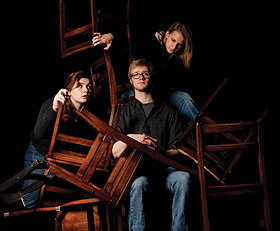 An introduction to The Living Newspaper Project: Everyone has Something by Elle Thoni, Augsburg senior and the production's assistant director

Have you been looking for the article about The Living Newspaper Project: Everyone Has Something, the theatre arts department's upcoming main stage production? There isn't one. Instead, we invite you to watch a student-made documentary about the original play, which was written and developed by Augsburg students. Why the departure from a traditional article? In many ways, The Living Newspaper Project is a departure from Augsburg's typical approach to main stage productions. Not only was the play created by Auggies for Auggies; it was created using a wide variety of performance modes from live music to puppetry to video projections. There are plenty of surprises in store for audience members.

In November, the student ensemble chose a contemporary issue they were interested in exploring through dramatization. Their choice was the stigma attached to mental illness. As assistant director, I chose to create a documentary about The Living Newspaper Project because the project itself is, in many ways, about contemporary media. What types of media do we interact with on an everyday basis? How do they influence our perception of one another and even ourselves?

There are no easy answers. Our aim, rather, is to facilitate a dialogue about these issues on campus and in the surrounding community. I encourage you to watch the documentary, attend a performance, and participate in our post-show discussions on February 10 and 12. We'd love to have your voice in the conversation! After all, everyone has something.

Special thanks to the Living Newspaper ensemble, Wesley Ellenwood, Taylor Kaiser-Gajeski, and Joe Funk for their help with the making of the documentary.

Inspired by the original Living Newspapers of the Federal Theater Project in the 1930s, this student-devised performance uses a range of nonfiction sources to explore a current social issue. Ensemble members gathered interviews, articles, and multimedia—and generated their own writing—to create and stage this unique piece of socially conscious theatre.