Somé to speak at Counseling and Health Promotion convocation 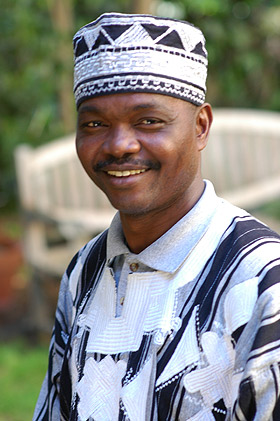 The Augsburg College 2010-11 convocation series continues Friday and Saturday, Feb. 11 and 12, with author and activist Malidoma Patrice Somé. A book signing will be held Friday at 5 p.m. and Saturday at 11:30 a.m. in the Arnold Atrium, Foss Center.

Before his birth, in 1956, the elders of Somé's village knew that his purpose in coming into this world was to carry the message of indigenous technology and spirituality to the western world, a place where modernity was growing increasingly hungry for a reconnection to ancient wisdom. Little did he know, as a young child stolen from his family and village, that the years he would spend under the harsh tutelage of the religious order would prepare the way for the eventual challenge of integrating old and new, the sacred and the mundane. For more than twenty years, Malidoma Somé has shared the wisdom of his ancestors and tribal elders, awakening a deep knowing in the hearts and bones of those who have recognized in his name, his books, his voice, the spirit world inviting the renewal of a powerful and abiding relationship with all beings on earth.

Somé is the author of several books, including Ritual: Power, Healing and Community, Of Water and The Spirit, and The Healing Wisdom of Africa. He has earned two doctorates—one from the Sorbonne in Paris and a second from Brandeis University in Boston. Somé is also an initiated elder in his village in Dano, Burkina Faso, W. Africa. He travels throughout the world bringing a message of hope, healing, and reconciliation through the powerful tools of ritual and community building. Through his lectures and the introduction of ritual in a way that the western psyche can embrace, he offers life-altering medicine and the opportunity to explore the meaning of purpose within one's community.

"It is possible that we have been brought together at this time because we have profound truths to teach each other. Toward that end, I offer the wisdom of the African ancestors so that Westerners might find the deep healing they seek. From an indigenous perspective, the individual psyche can be healed only by addressing one's relationships with the visible worlds of nature and community and one's relationships with the invisible forces of the ancestors and Spirit allies.

The spark of this ancestral flame, which I have brought to the land of the stranger, is now burning brightly. Increasingly, I have been and will be encouraging westerners to embody these traditions as a testimony to the indigenous capacity to assert itself with dignity in the face of modernity. In this way the ancestors will know that this medicine has found a true home- that it is more than an honored guest."