Learning about war and peace in El Salvador 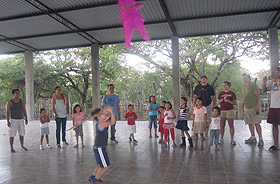 We met with several speakers and visited different places, such as churches, a university, and a rural community, in hopes of learning more about their culture, history, and people. We primarily learned about their civil war (1979-1992) and about the roles faith and identity play in the midst of social injustice, oppression, and conflict.

Upon arriving in the country, we settled in at a guesthouse owned by a woman who fought as a guerrilla during the war. The next day we visited a church where Archbishop Oscar Romero was assassinated in 1980. Romero was made Archbishop in 1977 in hopes that he wouldn't do much; the Catholic Church at the time didn't want involvement with war or with the people, and Romero was the perfect man for their agenda.

Though he was what the Church wanted at first, he became increasingly involved with the people and underwent a personal transformation, becoming a leader and a voice for the people. He once said, "If they kill me I will arise in the Salvadoran people." And arise he has. Junior Katie Gessell remarked, "For me, this experience finally brought me back to my faith...Seeing how little the Salvadoran people have along with everything they have been through, and then seeing how much faith they still had in God was incredible."

In addition to learning about Romero, we also heard from speakers who experienced the civil war. One day we visited Suchitoto and took boats to an area where a massacre had taken place. A man who had endured the massacre spoke to us about his experiences as a child during the war, losing his family at age 9 in the massacre; he recalled memories with startling clarity.

Afterward, a woman who had also shared her experiences asked us to stand in a circle. She prayed and then told us to hug one another and say, "No more war." She began to tear up and the whole experience was profoundly moving. Though there can be no justification for the atrocity these people went through, some redemption may be found in the impact their stories have on others. Junior Hayley Thomas responded, "Their stories were extremely powerful and the passion they had for their country and their work really inspired me to make a difference with my own life."

Outside of hearing intense personal stories, we also visited places of national interest, such as the U.S. Embassy and the National Assembly building. We heard from deputies from the ARENA and FMLN political parities. It was shocking to learn that the U.S. supplied the corrupt Salvadoran government with $1.5 million per day for 12 years during their civil war, leading to a longer war and many more civilian deaths.

Senior Adam Jacobsen commented on how remarkable it was that the people were so open to us, as Americans, in spite of this. He said, "They really understood that our government's decisions at the time were not our own." Most of the people we met were compassionately able to make a distinction between the American government and the American people.

On one of our last nights in the country, in the rural area of Nueva Esperanza (New Hope), a group of young people who call themselves "Mercy" came and performed traditional Central American folk songs. Everyone's faces lit up with joy, and some children from the community came over to listen, as well as another American group that was visiting the country. The next evening we brought piÃ±atas to the kids and played with them. Music and play brought people together.

These experiences serve as a testimony to what all of us hopefully learned from this trip; people are people, and no matter creed, religion, or race, we are all united by a common thread of humanity. As the Salvadoran poet Roque Dalton once wrote, "...my veins don't end in me."