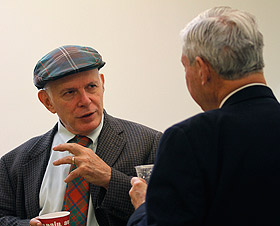 Minneapolis-St. Paul enjoys the highest civic health of any metropolitan area in the country, according to a report released on Monday by Augsburg's Center for Democracy and Citizenship (CDC). People in the Twin Cities are the most engaged in their communities—they are more likely to volunteer, to participate in community activities, to vote, and to engage with their neighbors. This healthy civic behavior correlates with greater economic well-being and individual health and happiness.

The report, "A Tale of Two Cities," is a joint project of the National Council on Citizenship (NCOC), the Florida Joint Center on Citizenship, and the CDC. It compares Minneapolis-St. Paul with Miami, which is shown to be the country's least civically engaged city. While the two metro areas differ in many factors, the report indicates that these differences—including demographic measures of education and income—do not explain the disparities in their civic engagement.

In a commentary for the St. Paul Pioneer Press and a blog posting for the American Democracy Project, CDC director Harry Boyte draws parallels to the Civil Rights movement, recalling when the Southern Christian Leadership Conference was formed to spread a "culture of civic empowerment" and promote nonviolence and a desire to change.

Just as "the Montgomery Way" helped spread democratic change in the South, Boyte believes in a Minnesota Way, which "teaches the skills of collaborative work across differences, connects institutions to the life of the communities, and generates a spirit of optimism that people can share their future together."

He points out that the "civic treasures" in Minnesota—including educational institutions like Augsburg that work across differences to foster a culture of civic empowerment—are critical factors in preparing students to discover how they can become agents of change to spread democratic hope and reform.

Read more about "A Tale of Two Cities" and download a PDF of the report at http://www.ncoc.net/ttcrelease.

Read his blog post at American Democracy Project at http://adpaascu.wordpress.com/.