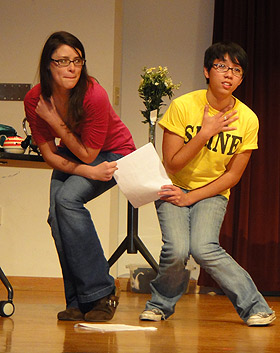 Even if you are a theatre major, there aren't many college courses where the semester ends with a theatrical performance. One exception is The Scholar Citizen, the introductory Honors program class at Augsburg. In this course, students read and discuss a text and then create a play, or in this year's case four plays, as part of a theatre lab attached to the class.

Larry Crockett, a professor of computer science who teaches this course, says this class serves as students' "...initiation to life as a scholar lived in an intentional community." He adds that in addition to introducing students to the rigor of the Honors program, the course also "â¦teaches them to see that they are not here to 'worship what is known,' as the late J. Bronowski once wrote, but to 'question what is claimed,' with a certain 'barefoot, ragamuffiin' irreverence."

This fall students read Michael Ruse's Evolution and Religion: A Dialogue. The text explores four different perspectives on the evolution/religion issue, named warfare, integrationist, independent, and dialogue. The class designated four writers, and each created a play based on his or her perspective. In class, says Crockett, students consider questions such as whether we are "fancy" chimps or beings made in the image of God, as the Genesis creation account teaches.

One student whose first semester experience was definitely shaped by this Honors course is Katie Nelson. Though her father is a pastor, Nelson says religion didn't factor into her public high school education. She says studying evolution and religion in this course helped to broaden her perspective and gave her more tolerance to different ideas. Though she didn't act in the play—she worked on publicity and created the program for the performance—Nelson says the theatrical aspect of the course taught her to be more creative and imaginative.

The Ruse text was especially significant for Crockett, who is a member of the clergy as well as a professor of computer science at Augsburg. "I want students to have the sense that we are here to air out the questions and to look at lots of alternative ways of defining who we are and how we should behave. I encourage every expression of belief and every question, whether or not the beliefs are religiously or politically correct, and whether the questions are impertinent or not," he says.

Crockett, who founded the Honors program at Augsburg, says The Scholar Citizen is his favorite teaching assignment. "[The Honors students] are young and bright and sassy and simply a delight. In a word, it is a program that this college should point to with considerable pride and satisfaction."