A writer finds hope at Augsburg 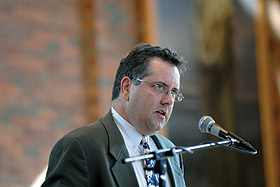 Jeffrey MacDonald says he came to Augsburg on a mission seeking hope.

The journalist and UCC minister was working on a book and heard that Augsburg College was an antidote to the problem he'd been exploring. His question â is it possible to offer experiences in the religious marketplace that genuinely shape the heart and character of others?

Recently MacDonald returned to Augsburg, published book in hand, to talk about his work. Thieves in the Temple: The Christian Church and the Selling of the American Soul was released in spring 2010.

"Augsburg was the antidote to the problem I was writing about," MacDonald said in an address to the Augsburg community. He said that the market-driven religious experience is focused on providing comfort, even therapy and coddling. He wondered, "Is there anywhere where people choose paths of costly discipleship?"

Chapter six, "Signs of Hope in the New Religious Marketplace," details the hope MacDonald found at Augsburg specifically in the curricular approach to exploring vocation as well as in the programs of the Center for Global Education.

While conducting research for his book, MacDonald met with faculty and students who had studied abroad through CGE. Instead of wanting to build a school or participate in service work, he said participants in CGE's programs spent their time learning about the experience of people they met. "They said, 'Let's settle in, slow down, and get to know people before rushing in to solve their problems,'" MacDonald recalled.

What resulted, MacDonald said, is that students saw the pain and shame of others but also experienced their joy. "They saw and heard and smelled, and they said, 'I want more of this.'" MacDonald was impressed that students were not only committed to returning to the countries they visited but also to engaging in service within their own communities in the states.

That is precisely the kind of the costly discipleship MacDonald found students openly embracing at Augsburg College.

"At Augsburg, people are discovering why they should choose suffering. They are taking the step to know the pain and suffering of others, and therefore bringing compassion into their own lives."

Read more about G. Jeffrey MacDonald and Thieves in the Temple on the author's website.