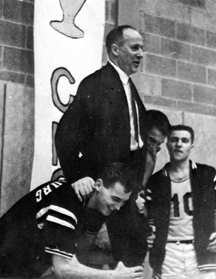 Note: This event was originally planned to be held on January 29, but was postponed due to bad weather.

A ceremony to dedicate the court will be held during the Augsburg men's basketball team's Saturday, Feb. 17, game against Gustavus. Game time is 3:00 p.m. A pre-dedication luncheon will begin at noon at the college's Christensen Center. Tickets for the luncheon are $12. To make reservations for the dedication luncheon, contact Irene Steenson at (612) 330-1245, or for more information, contact Norm Okerstrom at (612) 330-1616.

Anderson served the college as men's basketball coach for 23 seasons and as athletic director for 34 years, in addition to teaching in the health and physical education department for nearly four decades.

Anderson has been a member of the Augsburg community since the 1930s, when he attended the Augsburg Academy as a prep student. He played basketball and baseball at Augsburg, graduating from the college with a history degree in 1937.

After receiving his master's degree from the University of Minnesota, he returned to his alma mater in 1947 as athletic director, men's basketball coach and as an instructor and director of health and physical education.

He coached basketball for 23 years, (1947-70), compiling a 266-239 overall record. The Auggies won MIAC crowns in 1963, 1964 and 1965, advancing to NAIA district competition and the NAIA national tournament twice. He earned MIAC Coach of the Year honors each of the conference title seasons.

As athletic director, he was president of the NAIA in the 1970-71 school year, was named to the NAIA Hall of Fame in 1975, and was inducted into the Augsburg Athletics Hall of Fame in 1975. He also earned the Distinguished Service Award from the Minneapolis Chamber of Commerce in 1965 and 1970. He served on several NAIA committees and on the United States Olympic Basketball Committee from 1969 to 1973.

In 1984, the college named its outdoor athletic field in honor of Anderson and longtime coach Edor Nelson. The field will be rededicated in Nelson's honor in the fall of 2001.

Both the Anderson and Nelson events are part of a celebration of recent major improvements in Augsburg's athletic facilities. Augsburg has recently completed major renovations in Si Melby Hall, installing a new playing floor, bleachers and scoreboard in the gymnasium, along with a renovated fitness center and new offices. The Augsburg Ice Arena also received new boards, glass, bleachers and new scoreboards, along with other renovations, during the summer of 2000.