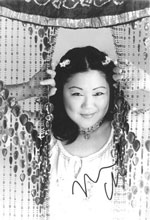 Well-known actor, comedian, filmmaker and activist Margaret Cho will bring her standup comedy act to the Twin Cities once again for a one-night appearance at Augsburg College on Tuesday, December 12 at 7:30 p.m. The show will be held in the Si Melby Gymnasium on the Augsburg College Campus, 2211 Riverside Avenue, Minneapolis. General admission tickets can be purchased by contacting Ticket Works at 612-343-3390 or online at www.ticketworks.com beginning Saturday, Nov. 18. Tickets for Augsburg students are free and may be picked up in the Student Affairs Office during normal business hours, beginning Nov. 6

Cho's two performances in the Twin Cities last winter at the Women's Club sold out. She was the star of the first Asian-American family sitcom on television, "All-American Girl," and recently produced a film which recounts her days on the sitcom. "I'm the One That I Want" was filmed at the end of a 40-city sold out record breaking tour at the historical Warfield Theater in her hometown of San Francisco on Nov. 13, 1999.

The show won New York Magazine's Performance of the Year award and was named one of the Great Performances of the year by Entertainment Weekly.

This year, Cho was honored by GLAAD, along with Elton John and Elizabeth Taylor for being "an entertainment pioneer who has made a significant difference in promoting equal rights for all, regardless of sexual orientation or gender identity." Her "E! Celebrity Profile" won a Gracie Allen Award from the American Women in Radio and Television organization acknowledging its "superior quality and effective portrayal of the changing roles and concerns of women."